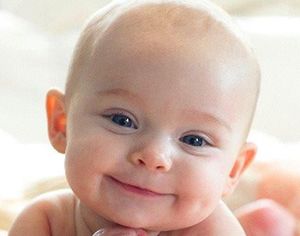 The 2014 Gerber Baby Contest winner was announced on January 21, 2015.   The Grand Prize winner was Grace from East Petersburg, PA.

Grace’s picture is similar to the original Gerber Baby picture and past Gerber Baby Contest Winners.

As the Grand Prize winner, Grace’s parents will receive the $50,000 grand prize, coupons for one year of Gerber Baby food and she could even appear in future Gerber promotions.

Here are some tips on winning baby contest photography

Although the winner was announced in January 2015 the award is for the 2014 Gerber Baby Contest which accepted pictures from mid-October until November 12, 2014.

The contest was held online at Gerber.com/photosearch.

All of the entries of the Gerber Baby Contest were reviewed by a panel of judges and they selected Grace as the Grand Prize winner.

The six category winners were selected by online voting on Gerber’s website. Visitors could vote for one baby picture for each category every day during the voting period.

Cassie Savage, Marketing Specialist at Gerber said that “While many of the entry photos this year met our criteria, Grace’s captivating charm stole the judges’ hearts. The Gerber Photo Search is celebrating its fifth year with this sweet new face!”

Here’s A Video of Grace – The Gerber Baby Contest Winner on the Today Show!

Visit NBCNews.com for breaking news, world news, and news about the economy

The Following aricle about the Gerber Baby Contest was
Posted: Wednesday, January 21, 2015 11:35

She’s 7 months old, and she’s already a star.
Little “Grace” from East Petersburg has been chosen by the Gerber baby-food giant as grand-prize winner in a photo contest among 180,000 entries, Gerber announced Wednesday. Grace’s parents will receive a $50,000 prize, one year of Gerber baby food and the opportunity to appear in a future Gerber advertisement as the 2015 spokesbaby, it was announced. “I take pictures of Grace monthly, just to see how much she changes,” Grace’s mother, Gabrielle, said in an interview Wednesday. The one picture of her daughter just jumped out, she said, and when family and friends saw it, “They all said, ‘You ought to enter that in a photo contest somewhere!’ “So since we love Gerber, it made perfect sense.”(Mom Gabrielle and her husband Alec, who have been married seven years, requested that their last name not be published by LNP. But their last name, Pfautz, was reported on NBC’s “Today” show, on which Grace and her parents appeared briefly on Wednesday morning). Her husband was in college for the first four years of their marriage, Gabrielle continued, so the financial help from Grace’s victory will come in handy. “We plan on using all of the funds for Grace, for college, and for any future children we may have.” Grace, born in June, is their first child, she said. The Gerber “Be Our Baby Photo Search 2014” was held online at Gerber.com/photosearch, where parents and guardians were invited to enter a photo of their child into the search during the entry period. A panel of judges reviewed the entries to find children from birth to preschool age whose photos “displayed expressiveness and consistency with Gerber’s heritage,” a news release said. In the last five years of Photo Search, Gerber, founded in 1928, has celebrated six other winning babies, from a dimpled, smiling 2-year old in 2010 to a pair of charming twins in 2013.
For more information on Grace’s victory visit the  Gerber baby contest.com.