The Gerber Baby is one of the world’s most famous babies! 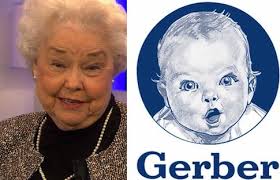 She has been appearing on packaging and marketing materials for Gerber since 1928.  That’s the year Gerber ran their very first Baby Contest.  The winning entry was a pencil sketch submitted by Dorothy Hope Smith of her neighbor Ann Turner Cook.  The picture was almost immediately  placed on Gerber’s logo and has been appearing ever since.

It’s hard to believe, but the Gerber Baby is almost 90 years old!

The Gerber’s cute baby was introduced on the company logo in 1928, the image has appeared continuously and has appeared on millions of baby food bottles and in thousands of marketing campaigns.

Everyone knows the Gerber Baby!

If you grew up in America or have raised children here, you know the Gerber Baby!

Since Gerber has controlled up to 70 % of the canned baby food market almost everyone who has fed or been fed baby food has been fed by Gerber.

The Gerber Logo is a marketing masterpiece.

We’re not aware of any logo that has defined a brands identity or has created more loyalty than the Gerber Baby.

Gerber traces its origins to the Fremont Canning Company, a little packager of peas, beans, and fruits in rural Michigan started by Frank Gerber and his papa in 1901. The infant food line was state in 1928, and the Gerber Families careful planning and marketing strategy that relied on both public and expert recommendations, developed the foundation upon which the present-day company rests.

The Baby food project was extremely effective and the founders are credited with starting a brand new industry. The Gerbers had actually developed a brand-new food market – canned baby food, which was previously only available from pharmacists or doctors for special needs children.
Since the company’s creation the Gerber Baby has represented the giant of the children’s food market. Gerber Products Company delights in strong credibility and is one of the biggest providers of children’s food worldwide. Gerber has actually controlled the baby food market in the United States and has recognized market shares as high as 70%.
In 1991 Gerber entered the foreign markets in an attempt to expand their success internationally.  Although 98 percent of the world’s births take place outside the United States, just 10 percent of Gerber’s sales originated from this still mostly untapped market.

The Gerber Baby Contest is an annual contest that has offered huge prizes and is available only for residents of the US.